Here Are The Best Self-defense Weapons For 2022

Here Are The Best Self-defense Weapons For 2022

Everyone should carry at least one non lethal weapon. Yes, Why? Because not every conflict calls for a lethal response. For example: Sometimes a non lethal weapon is the best answer. Or maybe you just don’t want to carry a gun. In this case, you need a different method of protection.

That’s not to say it cannot kill someone if shoved into a lethal area of the human body. However, if you know how to use a tactical pen properly, Hell, even if you must use it to stab an intruder in the eye, they will still likely survive the incident.

If you’re anything like me, then the protection of yourself and your family is of utmost importance to you. I would contend that none of these less-lethal weapons for self-defense that I will highlight are superior to a firearm in the hands of a well-trained person, but each of them has its place in either civilian or law enforcement arenas.

The Best Self-defense Weapons For Men In 2022

I know some of you are probably thinking the same thing I do when considering the effectiveness of less-lethal weapons; that being you’d rather have a firearm than any tool that will be listed below. Let me tell you that I agree. A firearm is the greatest self-defense tool for a violent encounter that has ever been created.

That said, there are many reasons why a less-lethal weapon could be preferred by some. Some people simply are anti-gun and they refuse to have them in their homes. My brother-in-law and sister-in-law (wife’s side) are exactly this way. They are completely opposed to firearms within their home. Another reason one might not have a firearm is that they live in a dictatorial city like New York or Chicago in which firearm ownership rights are not recognized as they are in much of the rest of the country (which, according to the crime statistics in those two locations doesn’t seem to help much…).

Soccer moms can carry it everywhere they go in their purses, etc. It is just an easy tool to possess and conceal. Unlike a taser, once you get hit with pepper spray you are out of the fight for a while. The goal in a violent situation is to de-escalate as quickly as possible without getting hurt so you can get to safety.

Pepperball launchers come in a variety of options, from those that resemble traditional paintball guns, to those that look like a standard pistol, to one named the Pepperball VKS that resembles an AR-15 platform. The Pepper, Ball VKS can fire projectiles up to 150 feet.

The civilian version of the Pepperball gun comes in multiple sizes and configurations from one that looks like a typical pistol to one that looks more like a battery-powered flashlight. These options provide civilians the ability to carry the weapon more concealed than is typically possible or necessary for law enforcement.

For a fee, the Pepperball gun could be just the tool you’ve been looking for to protect yourself and your family. 4) Rubber Bullets/Beanbag Rounds Rubber bullets are either bullets formed from rubber or metal projectiles covered in a rubber coating. They are also perhaps the most painful and devastating less-lethal tool for self-defense on this list.

This device could obviously be used by law enforcement to ensure the quick and safe arrest of a violent suspect. It could also be used by a homeowner in the event of a home invasion if the homeowner is looking for a less-lethal self-defense option than a 12-gauge. The Bola, Wrap entangles the suspect.

After all, you might’ve left your firearm on the nightstand as you are accosted while mowing your grass. Or, perhaps you forgot your pepper spray in the car as you quickly ran into the gas station for a soda. The one item you always have at your disposal — assuming you possess it — is your fighting acumen.

Don’t mistake that to mean that you can drive around haphazardly spraying random people without repercussion, but consider the back-end of the situation in which you were involved and the aftermath you’ll have to deal with when discharging a firearm. I’m not at all saying don’t use that gun if you have to, I just want you to also consider the legal repercussions you may face.

While gun ownership is common and popular within the United States, a firearm is often not the best choice for most self-protection needs. As a result, non-lethal self-defense weapons present a method for detouring violent crime without the risk of fatalities. Sidearms are outstanding for self-protection when the individual is responsible and well trained.

There are numerous benefits for electing to carry a non-lethal self-defense weapon: Non-Lethal Compact Legally Carry About Anywhere Little Training Necessary* It’s important to prepare and plan for worst-case situations that may impact your personal safety or family security. For this reason, consider arming yourself with the best pepperball launchers. 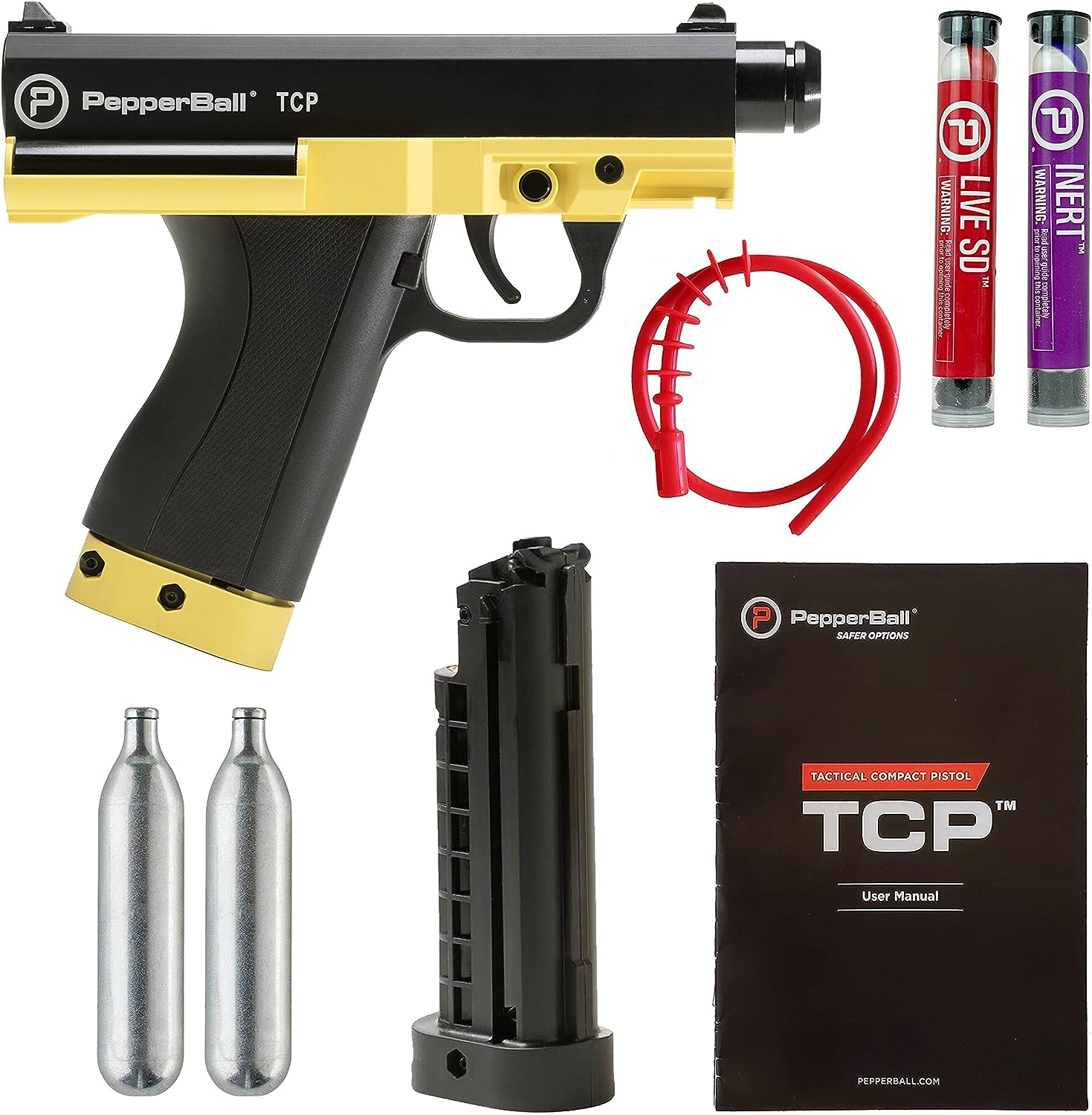 These nasty side effects are effective at granting a victim several minutes to defend themselves or flee an attacker. It’s important not to confuse pepper spray with other agents like tear gas (CS) or mace. While these agents also work for personal protection they are not quite as powerful. Here are a variety of reliable pepper sprays to consider for self-defense: Pepper sprays for self-defense are sold in numerous variations.

The Best Self-defense Weapons For Men In 2022 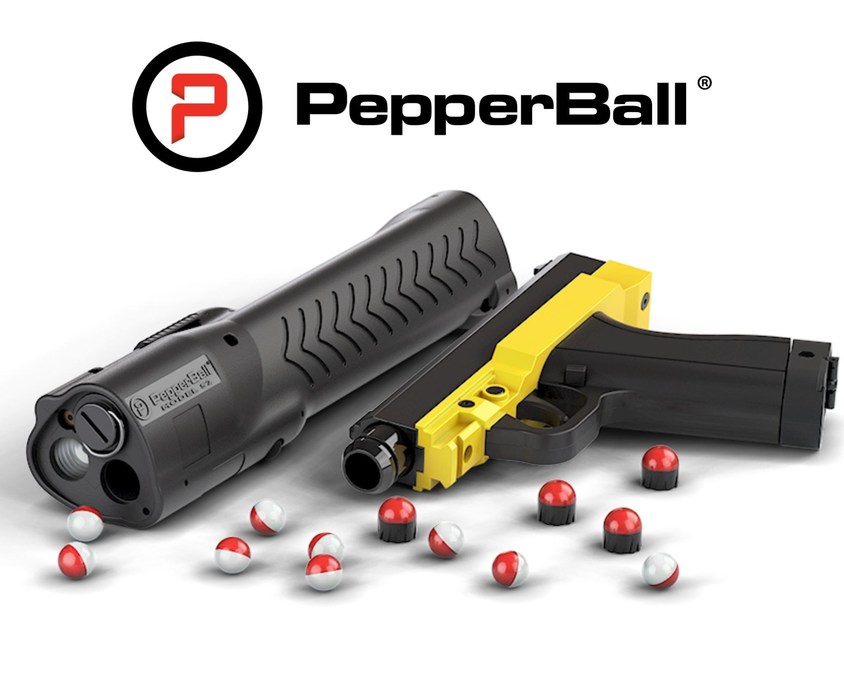 #2. Self-Defense Alarms & Whistles “Deterrence” is a term that is familiar to those in law enforcement. The term means something different for every weapon. Nonetheless, deterrence is the ability for a weapon to insight fear and panic without the need to actually use it. While self-defense alarms and whistles may not be as thrilling as brandishing a firearm, the deterrence factor remains comparable.

Best Self Defense Weapons (Non-lethal) In 2022

Alarms and whistles used in self-defense situations alert others in the area to danger and generally detours criminal activity. Criminals have a motive to act quiet and discreet to avoid getting caught. In other words, they want an “easy target” that will not make much noise or put up resistance.

Unless you are well-trained in hand-to-hand combat or have concealed carry, these types of alarms are the most practical. The annoying, blaring sound of these alarms will get the attention of anyone in the area and likely detour the attacker. In fact, some of these self-defense alarms are so loud that the decibel level reaches higher than gunshots and train horns.

#4. Self-Defense Knives Knives utilized for self-defense are difficult to classify in terms of lethal vs. non-lethal weapons. However, most categorize a knife as a tool more so than a lethal weapon. Thus, self-defense knives are deserving of being on this list because of the image they project to a criminal.

However, they are not nearly as compact for those that prefer not to carry with a holster. While self-defense laws vary depending on the state, many locations are more tolerable for carrying knives compared to firearms. Top-Rated Self-Defense Knives The best personal protection and self-defense knives include: These are just a few of the many outstanding self-defense knives available for sale.

For this reason, it’s relatively straightforward to pack these in a backpack or purse. There are several techniques you can utilize armed with a baton such as putting someone in an arm-lock or restricting the airway. Technically, batons are lethal because a clear whack to the head can easily cause serious head trauma, even death. There are many items that we haul around that we can use to protect ourselves with the proper knowledge and training. Best of all, these self-defense weapons are non-lethal. Thus, you are not as likely to get into legal trouble or register for conceal carry in order to protect yourself and your home.